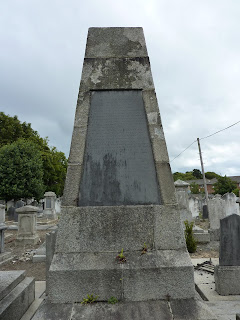 There's a grave in Mt. Jerome cemetery that faces the entrance to the crematorium. This grave contains the remains of a man named Gideon Ouseley, who died in 1839.
While waiting outside the crematorium a few months ago, I noticed his grave and the obituary that was written on it. I'd never heard about this man but, obviously there was something amazing about the life he lived if his peers and relatives deemed it appropriate to leave this memory of him. My heart leapt when I read what was written:


Gideon Ouseley
Departed this life May 14 1839
In the 78 year of his age
He was a zealous laborious and self denying minister of the gospel of our Lord Jesus Christ throughout the United Kingdom, and during nearly half a century, he was ceaselessly engaged in his masters work
In Ireland especially in it's towns and villages, fairs and markets
Regardless of personal ease fearless of danger
Uninfluenced by the policy of those who are prudent in their own sight
He persuasively called on men to repent and believe the gospel
There was something amazing about the relationship this man had with his Lord. He was an unconventional preacher. He once stopped at a funeral and translated it word for word, from latin into Irish, so that the people at the funeral could for the first time understand what was being preached. He told them to "listen to this" when there was something he felt the Lord was speaking specifically to them.
Afterwards, the priest said he must be an angel because no man could do what he had just done. Men and women were added to the kingdom because of this.

Gideon preached all over Ireland and was accompanied by a man named Charles Graham. At one time, they visited Kilmore, where men of God had gone before including John Wesley, yet they didn't refer to the past.
In Gideon's biography, it is said that they "were so full of their own spiritual and soul saving work that the only utterance of theirs, recorded by Dr. Coke, referred to the present, not to the historic past. Graham writes: 'The Lord be praised, this country is all on fire. Travelling preachers, local preachers, leaders and hearers are flaming with the glory of God'".

This is but one incident of what happened in Gideon's life. In Jeremiah 29, The Lord God said:

When you think about what is going to happen in your life, what you want to achieve and what you want to be remembered for, why not ask God what His plans are? He knows you better than you know yourself. He knows that there are things that He created you for, that can't be accomplished by anyone else. He knows that He made you who you are for a reason, and that part of that reason is that you are much better at being you than anyone else!

Gideon Ouseley led thousands to Christ, and they were all over the island of Ireland. Galway, Cork, Drogheda, Enniskillen, Dublin were just some of the places he ministered and many people of different class and culture were influenced by his teachings.

Lets seek God for the plans He's made for us. I want to be able to say "The Lord be praised, this country is all on fire" Just like Charles Graham did. When we go after what God is giving us, we can know that we are going to have an influence over this land that will go on for generations. Gideon Ouseley has been preaching from beyond the grave for 172 years now, just because of his obituary!

So the question is; dare to be a Gideon?


If you want to read more about Gideon Ouseley, his biography, "Gideon Ouseley: The Wonderful Irish Missionary" can be downloaded here in various formats free of charge.
Posted by The Prayer Team at 03:30